To share your memory on the wall of Doris Gonterman, sign in using one of the following options:

Doris was born on August 25, 1954 in Fulton, Missouri the daughter of George Pierce and Mary Kathryn (Gregory) Vaughn. She was raised in the Mexico, Mo., area prior to moving with her family to Auxvasse, MO then to Quasqueton, Iowa in 2011. She was married to Larry Hager who later divorced and then to Marlon Gonterman, and later divorced. Doris enjoyed watching Television with her family especially America’s Got Talent.

Doris was preceded in death by her parents, a son, Marlon Gonterman, a sister, Margie Nelson, and a brother Orr Pierce.

To send flowers to the family or plant a tree in memory of Doris Ann Gonterman (Pierce), please visit our Heartfelt Sympathies Store.

Receive notifications about information and event scheduling for Doris

We encourage you to share your most beloved memories of Doris here, so that the family and other loved ones can always see it. You can upload cherished photographs, or share your favorite stories, and can even comment on those shared by others.

Posted Nov 24, 2020 at 02:58pm
My thoughts with all of you. I so enjoyed talking to Doris on the phone or seeing her in the hospital, she simply treasured her family, you guys just were the world to her. Thanks for sharing her with us. Peggy RN Palliative Care.
Comment Share
Share via:
TF 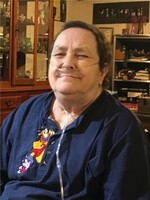