To share your memory on the wall of Helen Barske, sign in using one of the following options:

Helen was born on January 17, 1942 in Brooklyn, IA the daughter of Bernard W. and Bernadette F. (Powell) Aldrich. In 1946 her family made their home on a farm in rural Brandon, IA. She graduated from St. John’s High School in 1959 and went on to work at Collins Radio in Cedar Rapids, IA. While working there she met the love of her life Jerry L. Barske. They were married on May 20, 1961 at St. John’s Catholic Church in Independence. For a short time, they made their home in Marion, IA before moving to Independence, IA in 1968. Helen started working at Geater Manufacturing in Independence, IA in 1969. She worked there for thirty-three years before retiring in 2002. Helen enjoyed staying active and was a member of the Independence bowling league and the Wapsipinicon Golf Club for many years. She was an avid card player and played with the same card group for over forty-five years. She also enjoyed her trips to the casinos; Helen and Jerry took a trip to Las Vegas and more recently Laughlin, NV almost every year. Spending time with her family at holiday gatherings held a special place in her heart. Watching her children and grandchildren grow into the people they are today is what she the most thankful of in life.

She is preceded in death by her parents, Bernard and Bernadette Aldrich, her husband Jerry Barske, and a sister Mary Lowe.

To send flowers to the family or plant a tree in memory of Helen Thelma Barske (Aldrich), please visit our Heartfelt Sympathies Store.

Receive notifications about information and event scheduling for Helen

We encourage you to share your most beloved memories of Helen here, so that the family and other loved ones can always see it. You can upload cherished photographs, or share your favorite stories, and can even comment on those shared by others.

Posted Nov 15, 2020 at 10:18am
I didn't know Helen but I know her family (Doug and Margie + children); memories and tears are good for the soul. Prayers for all who loved her.
Comment Share
Share via:
MC

Posted Nov 14, 2020 at 06:59pm
Terri, Jerry and Doug, and the entire family, I was so sorry to hear about Helen. She had a such a lovely personality. And she was a great friend to my parents, Larry and Irene. —Michele (Head) Cowling
Comment Share
Share via:

Posted Nov 13, 2020 at 07:51pm
We are so very sorry to hear about Helen. May your treasured memories bring you great comfort. Hugs from the Dudley Family.
Our deepest sympathy to you all. We love ya's.
Comment Share
Share via: 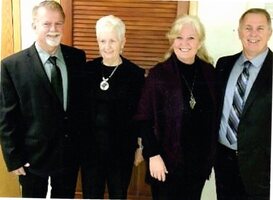